3 Reasons For Running Image Only Ads With Google Adsense

I want to share with you an amazing revelation I had just the other day with Google Adsense that has 100% changed my approach to maximizing my earnings with Adsense.

As you already know, sites that are running Google Adsense are a dime a dozen.  It’s hard to go anywhere on the web these days and not see Google Adsense ads running.  From sites as big as NYTimes and Mashable, to blogs as small as my tablet pc blog, Adsense ads are the prime choice of content producers for earning revenue.

But have you ever wondered, like I have, what are the best ways to capitalize on the Adsense ads you are currently running?  I can’t tell you how many hours I’ve spent optimizing my Google Adsense campaigns – testing, analyzing, then switch things up, then analyzing data so more.  I mean, if there were an award for the most time testing Google Adsense theory, then I would be first prize winner!

What my eyes were opened to really, for me anyway, answered a long standing question I’ve always asked myself about Google Adsense strategy.  And that is: should I use image and text ads, or just image ads, or just text ads?

If you are anything like me, then you’ve probably asked yourself that question a million times and tested things out ten million times.  But just the other day, what I discovered has completely answered my question once and for.  Or maybe until someone convinces me otherwise – but for now, this is pretty definitive.

So in line with my title:  3 Reasons For Image Only Ads with Google Adsense, let me start with #1.

1)  Image ads have a substantially higher chance of being clicked

This is actually easy to see by looking at a text image ad.  Here’s an image of 728 x 90 (square) Google Adsense text ad:

This is very identifiable image ad that I’m sure you’ve seen a million times while browsing through your favorite blogs and news sites. But what I want to point out about the Adsense text ad is what I call dead space within the ad itself.

What is dead space?

Dead space is something that is only found in Google Adsense text ads, and it’s the space between the linked (or clickable) title and the URL (which is also clickable.  The deadspace is simply the text that falls in between the title and URL.

Next time you’re looking at a Google Adsense text ad, go ahead and try to click the text in between the title and URL, you’ll notice you can’t.  And this is the dead space where you could potentially be losing out on valuable clicks.

So with image ads, you’ll instantly increase your chances of generating more clicks because your clickable ad space increases by quite a lot.

I have, from time to time, had a member of Google Adsense contact me to talk about my overall ad strategy with my blog.  And everytime, the Adsense rep states that running both text and image ads helps you increase your chances of making more money.  They (being Adsense) believes that by running text and image ads, you have more marketers available to compete for your clicks which in turn, increases the profitability of each ad that runs.

From my experience, I actually see the opposite at work.  When I run both Adsense text and image ads, the total revenue earned decreases.  And I believe it’s because when you run text and image ads, your marketplace of available ads increases dramatically which allows Google’s system to a lower value on each ad impression.

But when you run image ads only, you are decreasing your market supply.  With a smaller competitive market now bidding on your market space, it would make sense to me that the amount an advertiser is willing to spend would increase for your site – not decrease.

This leads me to reason #3 as to why I’m a strong proponent to image only Adsense ads.

When you run image only ads there is now a much smaller pool of advertisers who ads available to run on your site.  Which tells me that the remaining advertisers who are available to compete with your ad space would be willing to spend more for each impression.  To me, it’s a simple law of supply and demand.  When the supply is high, the price demand per unit is low.  When supply is low, the price demand per unit is high.

In the world of Google Adsense, this “supply and demand” equation is represented in the eCPM – ” or the “effective cost per thousand impressions.”

Here’s an image of what I’m talking about in regards to eCPM: 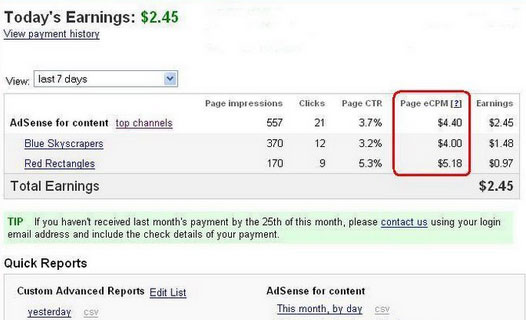 Find a way to increase your eCPM, and you’ll in turn increase your earning potential.  Your earnings per click will increase because of your increased eCPM.  Basically, eCPM is a value indicator that drives the amount your earn per ad impression.

Image only ads will contribute to a higher eCPM because, as I’ve stated already, image ads increase your total “clickable” ad space per page, and will lean the supply and demand side of the ad inventory in your favor.

Like I said, if you talk to the folks at Adsense, they will more than likely tell you the exact opposite is true.  That by running both image ads and text ads you will in turn increase your earning potential because you’ll have more advertisers competing for your ad spot.

With image ads, you’ll typically find that advertisers are willing to pay more per click than with a regular text ad.  This is true in a lot of cases because advertisers place more value on an image ad than a text ad.  Think about, with a text ad in a 728 x 90 banner ad (see banner image above), the available advertising space in the banner will have not only your text ad, but the text ads of your direct competitors.  And even if the other ads aren’t direct competitors, they are still competing for the click.

But if you run a 728 x 90 image only ad, your business now occupies the entire pixel space of the banner ad.  Let me put a text ad and a banner ad together so you can see what I’m talking about:

In the text ad above, notice how there are actually four advertisers presented in the 728 x 90 ad space.  But in the image ad, it’s only one advertiser that’s occupying the entire ad space.

Because image ads occupy 100% of the available ad space, you’ll typically find advertisers will to spend a little bit more per click than with a text ad.

And if an advertiser is spending more money per click on an image ad, then if you are running image only ads, you’ll be the recipient of the higher bidding.

So what about your experience?

Looking at your experiences with Google Adsense, do you find that (or would you agree) that image only ads are more valuable than running text and image ads?

If not, then what is your experience in split testing the two different strategies?

Founder and contributor at Bipper Media.