Almost immediately after launching our client’s Facebook mobile ad campaign, along with a simple mobile web app featuring a “tap to call” button, they started getting calls from new customers looking for a quote…

Facebook mobile ads have been the most effective form of paid advertising I’ve seen in quite some time.  I realize that’s a bit of a “knee jerk reaction” to my recent experience with one of my local business clients.  But folks I’m telling you, it’s hard to ignore the results that this one Facebook mobile ad campaign is delivering to my client.

Before I dive deeper into how exactly I built this particular Facebook mobile ad campaign, and how I’m actively managing it, let me first give you some of the initial results so far.

Now this might not seem like a lot to you (and if it doesn’t, then you probably aren’t a local service company), but this particular client has been a dry spell for months.  He’s gotten occassional calls here and there, but they’ve all been from referrals.  I know referrals are key to any business and I certainly wouldn’t negate their value.  But his biggest struggle has been figuring out how to generate new customers, not just referrals.  And everything we’ve been trying for the past few months simply have not been generating the response he was expecting — even though is to ranked #1 in Google for his targeted keyword phrases.

So when we launched his Facebook mobile ad campaign and he started almost immediately getting new inbound calls from customers, I’m sure you can imagine his enthusiasm!

A little bit about the client

Next I want to give you some insight into the service my client offers, and how we leveraged Facebook’s targeting options to refine the exposure of his ad campaign.  First, my client installs invisible dog fences in Athens, Georgia and some of the immediate surrounding counties.  Since my client is a locally owned and operated business in the Athens area, he’s not particularly interested in driving 100 miles to service a customer.  Now, he’s been willing to make that happen in the past, but he believes (rightly so) that there’s plenty of business around the metro Athens area that can be generated – it’s just a matter of figuring out the most effective advertising to reach those potential customers.

And this is where Facebook mobile ads have come into play!

Here’s a summary of the targeting strategy we implemented:

So to recap the targeting demographics, here what we had so far:

The Ad Copy:  Creating an incentive

First let me share with you a screenshot of the ad – this is the desktop version, not the mobile version: 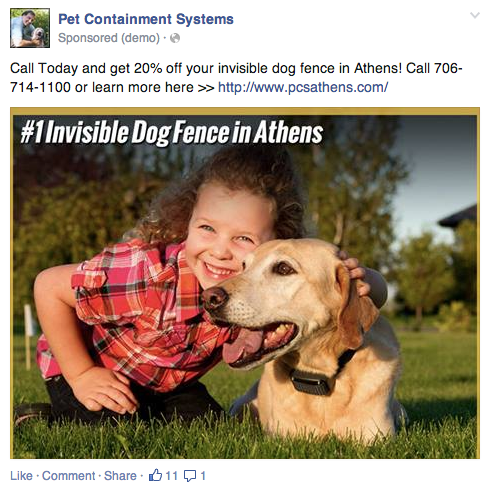 The ad variation we decided to go with was a Facebook post ad.  This is basically the equivalent of taking a Facebook page post and turning into an ad.  And because of we were converting a Facebook page post into an ad, we had the opportunity to create a message in the text portion that would hopefully compel people to call my client for a quote.  So, we went back to the tried and true method of creating a great offer and to anyone who called now to inquire.

The copy we used in the ad was this:  “Call today to get 20% off your invisibile dog fence in Athens!”

By leveraging the “call to action” with an incentive, we were able to at least reach people who were somewhere interested in the idea of installing an invisible dog fence, and putting them in a position of making a decision.  When people saw the offer of “20% off by calling”, I believe people were compelled to take the step to at least call and inquire.

The incentive in the ad copy – a strong, compelling reason as to why someone should call – I believe anyway, is what contributed greatly to the response my client has been experiencing from this ad.

We launched the ad campaign on a Friday, and by Monday afternoon our client had received 4 confirmed inbound calls from potential customers looking for a quote for an invisible dog fence.  A pretty strong response so far from this one particular Facebook mobile ad.

What about your experience?

So now it’s your turn… have you had a similar experience with Facebook advertising?  If so, I’d love to hear about your experience, your targeting strategy, and whether Facebook mobile, or Facebook desktop ads worked best for your campaign!

Founder and contributor at Bipper Media.