Desktop Icons Missing in Windows XP, How to Get Icons To Show Up (FIX)

I had the most interesting problem this morning on one of my computers where after the computer booted up, none of the desktop icons would appear.  Basically, the entire desktop and all of the desktop icons were missing.  So all I was looking at was the background image that I set – and by the way, I’m using Windows XP.

How To Fix Desktop Icons Missing

After staring at the problem for a while, and clicking > and rebooting > and stressing > none of the above worked.

But I eventually figured out how to fix the problem of my Windows desktop icons missing and get the entire desktop to reappear.  Here we go:

once you hit ‘ctrl alt del’ you’ll see the task manager appear and it should look like this:

After your Windows Task Manager loads, you’ll now need to click the “Processes” tab along the top of the task manager (see image above for reference)

Now that you’ve clicked the “processes” tab, you now need to find the processes called “Explorer.exe” – just scroll through the list until you find it > and then click it once to highlight (again, see image above as reference).

Continue to use the image above as a reference, you now need to end the “Explorer.exe” process by clicking the “End Process” button that’s located at the bottom right hand corner of your Windows Task Manager window.

So after you’ve clicked once to highlight “Explorer.exe” process > now end the process by clicking the “End Process” button in the bottom right hand corner (yes, I just became redundant…)! 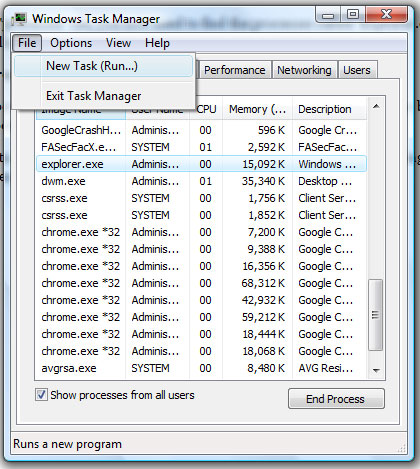 After you click “New Task (Run…)”, type in “explorer.exe” (without quotes) in the Open: line of the ‘Create New Task’ box.

And whalla… all of your desktop icons should now appear on your computer screen.

As a brief explanation, the ‘Explorer.exe’.  This is the process that presents your Windows operating system files, icons, and other functions that make up the interface of your Windows OS.  Basically, it’s what allows you to see all of your icons, options, windows, etc… Without explorer.exe, you would never be able to interact with your computer.

Hope this helps – leave questions in the comments.

How To Remove Yahoo Toolbar And Speed Up Your Computer