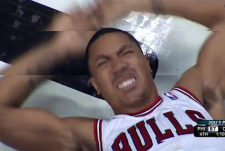 Derrick Rose, the superstar point guard for the Chicago Bulls, tore his ACL on Saturday in their win against Philadelpia.

From reports on the floor, Derrick Rose says “I just heard a pop” and that was hit.  The point guard came crashing down to the ground, along with the hearts and hopes of teammates, fans, and coaches.

When Derrick Rose hit the floor last night with a torn ACL, it wasn’t just the immediate NBA demographic that was severely impacted, but the likes of Adidas and the Olympic basketball team came crashing down to the floor with him as well.

Let’s take Adidas for a minute.  Just last year in February, Adidas signed Derrick Rose, the 2011 NBA MVP – whom they considered their premium brand player –  to a 13 year deal worth a whopping $185 million.  Which, after calculating for royalties on the sales of the Derrick Rose line of Adidas basketball shoes, could have netted him a cool $200 million.  The deal is scheduled to launch with the 2012 – 2013 NBA season.

From the Adidas basketball homepage, they say that the adizero Rose 2.5 is the lightest Rose signature shoe ever. 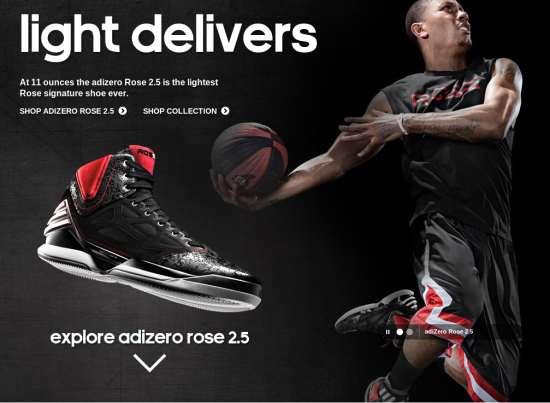 With Derrick Rose tearing his ACL however, the hopes of Rose showing up to play on the olympic team could have been dashed last night.  And Adidas needed Rose to help fight against the onslaught of Nike sponsored super stars like LeBron James, Kobe Bryant, and at the top of the food chain – Michael Jordan.  Adidas had all their hope in Derrick Rose coming through for them and putting Adidas squarely in competition with Nike’s basketball sneakers.

But now, with a torn ACL, this is not looking good.

Can Derrick Rose make a full recovery from his torn ACL and be back in the game 100%?

But is it likely that we’ll see Rose make it through the playoffs and into the finals with the Chicago Bulls, and then into the Olympics wearing his custom branded Adidas basketball sneakers?

I don’t this so.  I would guess that this injury has Derrick Rose down and out for a quite a while.

But what do you think?