Need A Good Reason For Cheaper Car Insurance in Atlanta? Here’s A Good One!

If you live in Atlanta and you’re looking for a good reason to pursue lower costs in car insurance, then look no further than the cost per mile increases that Atlanta drivers are facing. 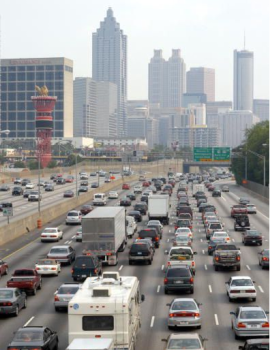 According to reports from the Clean Air Campaign, commuters in metro Atlanta are traveling an average of 35 miles, which equates to $21 per day and $5,250 per year – based on a 250 day work year.  And apparently the Clean Air Campaign isn’t accounting for the frustration that drivers experience while sitting in traffic jams on I-85.

These numbers represent a substantial increase from 2011 in the overall average driving costs for 2012.  And the majority of the cost increase comes directly from the large increase in fuel and tire costs.

According to AAA, “The average driving cost for 2012 is up due to relatively large increases in fuel and tire costs, and more moderate increases in other areas… Those increases were offset by a decrease in depreciation resulting in an overall increase of 1.9 percent.”

And these numbers can be broken down as such:

Related:  3 Tips To Getting Cheap Auto Insurance in Atlanta, Georgia

Reducing The Cost Of Auto Insurance in Atlanta

Variables like age, driving record, and whether the vehicle is new or used can have a dramatic impact on the overall cost drivers in Atlanta pay for car insurance.

“Regardless of whether gas prices go up or down, MARTA is always an affordable, efficient and environmentally friendly travel option for everyone in metro Atlanta,” he said. “A recent survey by the American Public Transportation Association found that you can save about $800 a month – or about $10,000 a year – by using transit instead of commuting by car. No matter how you slice it, that’s a lot of money.”

3 Tips To Getting Cheap Auto Insurance in Atlanta