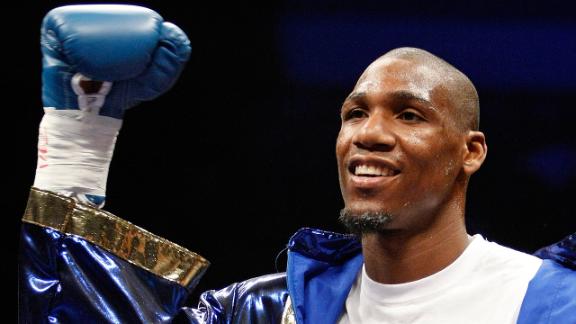 Boxer Paul Williams was involved in a motorcycle accident last week in Marietta, Ga. that severed his spine and sent him into emergency surgery.  Doctors originally reported that they didn’t believe Williams would be able to walk again, due to the extent of his injuries.

According to reports, the champion boxer Williams was on a motorcycle in Marietta, Ga. and forced to curve out of the way of an on coming vehicle, and then swerve again to avoid a head on collision with another car.

Williams eventually flew off the bike and landed on his back and head, which ultimately resulted in severing his spine and forcing emergency surgery that last nearly 6 1/2 hours.

According to the AP, ‘From the waist down, he has absolutely no movement. He’s in very good spirits, though,” George Peterson told The Associated Press from his home in Aiken, S.C. ”He still believes he’s going to fight again.”

Williams, 30, severed his spinal cord after falling on his back and head when he was thrown from his motorcycle Sunday morning in Marietta, Ga., Peterson said. Williams has been listed in serious but stable condition on Monday at an undisclosed hospital, Peterson said.

The crash happened Sunday morning in Marietta after Williams tried to avoid another car in the next lane that was negotiating a curve and then had to maneuver to avoid an oncoming car. Williams was in the area to attend his brother’s wedding Sunday afternoon, Peterson said.

”I know he’s going to make a statement after surgery on Wednesday, because he’s that kind of person,” Peterson said. ”He’s 100 percent coherent and still has the will to want to get back on the motorcycle.”

Williams was scheduled to fight Saul ”Canelo” Alvarez on Sept. 15 in Las Vegas but that event has been canceled, Peterson said.

His longtime promoter, Dan Goossen, confirmed the cancellation of the fight on Monday evening.

”Right now, there’s no thinking about any fights right now except for the fight that’s facing Paul right now – to get movement back in his body and keep the movement that’s above his waist,” Goossen said.

Mexico’s 21-year-old Alvarez was due to make his fifth title defense against Williams in the main event of a pay-per-view card at the MGM Grand in Las Vegas.

However, just days after signing for the fight, former two-time welterweight titlist Williams was paralyzed from the waist down in a motorcycle crash early Sunday in Atlanta on his way to his brother’s home on the day of another brother’s wedding.

How To Find The Best Auto Insurance Rates